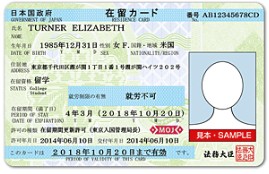 With 2012 just around the corner, a revised immigration control law that was passed in 2009 will soon take effect that will replace the foreign registration system with a new one. Although the new system will be similar to the old one, there are some important changes that foreigners in Japan should be aware of.

First, the current Alien Registration Cards will be will be replaced with new ones with a different name, “Residence Cards”. The new cards will have IC chips in them that will contain the person’s complete history of registered information, such as address residing at, visa information, and basic work and school information.

Secondly, under the new system, the maximum length for a visa before a renewal is needed will be increased from 3 years to 5 years. And third, the new system will make it a lot easier to leave the country and re-enter the country. For details see the official site here: http://www.immi-moj.go.jp/newimmiact_1/en/point_3-4.html

When will the changes take effect?

Officially the new system will start on July 9th, 2012. Applications for new cards to begin to be accepted six months earlier though, from January 13th. However, this doesn’t mean everyone needs to go out and get a new card immediately. For holders of the old card, you are allowed to hold on to your card until the next expiration date, or until a change is needed to be made (such as a change of address).

Where do I get the new card?

Current residents already in the country after July 9th can pick up their new cards at their local immigration office. It has been reported that newly arriving residents will pick their cards at the airport.

Why was this change made?

The two stated reasons for the change are to prevent forgeries of the cards (since the cards will have imbedded IC chips, they will be very difficult to forge), and to move management responsibilities from a municipal level to a national level. Also, there has been some discussion in the government about issuing the same cards to all Japanese people, similar a social security number in the United States.