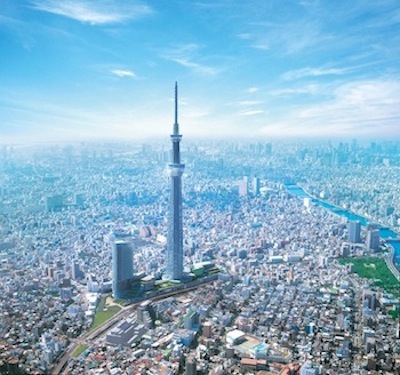 The newest land mark in Tokyo has already celebrated its first year last May 22. Being the highest stand-alone communication tower in the world with 634 meters in height, Sky Tree is also the highest building in Japan which took 3 years and 8 months to construct. Moreover, it got the world record from Canton Tower as the tallest tower in the world, which was awarded by the Guiness World Records Company.

After its public opening, Sky tree has been visited by both foreign and local visitors. In fact, visitors already reached over 1.64 million during the first week and this number was way more than what was expected.

Being a new land mark in Tokyo, Skytree has been successful in bringing in visitors not only in Tokyo, but also in the other parts of Japan. This tower comes in attractive colors and the structure is divided into several parts. Along the lower floors are: group entrance floor, entrance floor, exit floor, restaurants, aquarium, shops, offices, planetarium and more. On the other hand, the upper floors allow the people to enjoy the Tembo Deck (340-350 flrs) and Tembo Galleria (445-450 flrs), in addition to a restaurant, spiraling corridor and a shop.

When you go to Japan, Tokyo Skytree is a place that you shouldn’t miss. It is perfect for those, who want to see a picturesque view of the city. Whether you are with the whole family or with a group of friends, this is a best place to see. It highlights the observation decks that offer the spectacular view of Tokyo and the amazing 360 degree panoramic views.

After the eyes were filled with beautiful scenery, visitors can also enjoy good food served in different restaurants found on the upper or lower floors. French and Japanese cuisines are just some of the choices for a choosy palate. After a satisfying meal, visitors can also shop for different souvenirs especially for foreign tourists.

Through the Tokyo Skytree, foreign tourists have more reasons to visit Japan and for local visitors to appreciate the beauty of their place. Aside from that, this landmark also brought in additional income that reached to $1.7 billion and believed to hit $5.9 billion. Above all, the tower can also be appreciated during night time with its illuminating LED lights of blue and purple that can easily catch someone’s attention.